The Winds and Where Do They Come From?

Before we start, a quick recap. Probably "Old Hat" to many of you, but let’s review the basics for a moment before we move on:

Why do the Winds Blow? 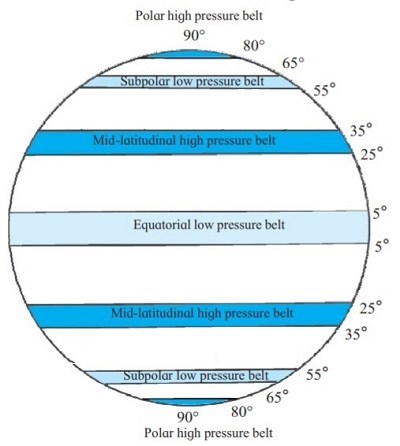 The Earth has (4) atmospheric pressure belts in each hemisphere (see left).

Beginning at the equator and moving towards the poles, you have the "Intertropical Convergence Zone" (ITCZ) or "Equatorial Low," the "Mid-Latitude High" or "Horse Latitudes," the "Sub-Polar Low," and the "Polar High."

Also known as the "Equatorial Low" or the "Doldrums." This area of low pressure extends from 5 degrees north to 5 degrees south of the equator or approximately 600 NM in width. It is defined by generally calm winds, overcast skies, with occasional violent squalls.

Due to the close positioning of these winds and the intense solar heating near the equator and subsequent evaporation, the warm, moist air of the ITCZ is forced up into the atmosphere (hot air rises). As the air rises, it cools, causing persistent bands of showers and storms around the equatorial section of our planet.

Because the air circulates in an upward direction, there is often little surface wind in the ITCZ causing many sailing vessels to become becalmed for weeks at a time.

As the rising air mass finally begins to sink in the area known as the "Mid-Latitude High" or "Sub-tropical High" pressure belt, where the air cools and moves downward toward the Earth’s surface.

These are found between 25 and 35 degrees north and south of the equator and are often referred to as the "Horse Latitudes." The warm, moist air that rose vertically from the ITCZ cools and begins to sink here. The sky is clear with few clouds and little rainfall and calm winds prevail.

The colder air at altitude descends then diverges near the surface. Some of the sinking air travels back toward the equator forming the warm, steady winds, known as the Trade Winds. The remainder flows towards the poles forming the Westerlies.

Generally found between 50 to 70 degrees of latitude north and south of the equator.

This low pressure belt between the polar easterlies and the mid-latitude is marked by the subpolar lows which produce major storm systems.

Are generally found between 80 and 90 degrees north and south of the equator.

Surface temperatures under the polar highs are the coldest on Earth and experience very low levels of precipitation. 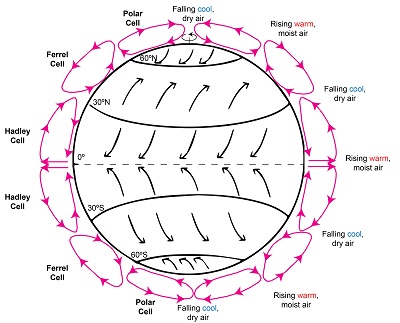 Between the above pressure belts are (3) circulation cells (see right) where warm air rises, the "Hadley, Ferrel, and Polar Cells."

This warm air mass begins to cool and sink in the areas known as the "Mid-Latitude High" or the "Polar High" pressure belt, moving downward toward the Earth's surface.

At the earth's surface the cool air mass diverges and begins to flow towards the low pressure belts resulting in surface winds. 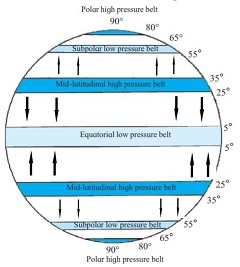 Since air masses flow from high pressure areas to low pressure areas, this means that the generated winds would blow either directly north or south, flowing from the highs to the lows.

Since north and south winds are not the norm, other factors must be taken into consideration.

The effect of the Earth’s rotation needs to be factored in.

Since the Earth rotates on its axis in an eastward direction, this causes a deflection of the winds, "Coriolis Effect." When looking from a High Pressure area to a Low Pressure area, the winds will deflect to the right in the Northern Hemisphere and to the left in the Southern Hemisphere.

All of this air mass rising and sinking, high and low pressure areas, plus the earth's rotation combines to create prevailing wind bands based on latitude.

The Earth has (3) major wind belts in each hemisphere which like the pressure belts above encircle the globe. Beginning at the equator and moving north or south, you have the Trade Winds, the Westerlies, and the Polar Easterlies.

The Trade Winds are found from about 5 degrees north or south latitude to about 30 degrees north or south latitude; an area approximately 1500 NM wide. In the Northern Hemisphere these winds are predominantly northeasterly and in the Southern Hemisphere southeasterly. They are caused by air flowing from the mid-latitudinal highs to the equatorial low (the ITCZ). The trade winds are among the most consistent winds on our planet.

Depending on the season wind speeds vary between 10 and 25 knots. The trades are typically at their strongest during the winter months. They have been used by sailing vessels to cross the world's oceans for centuries. 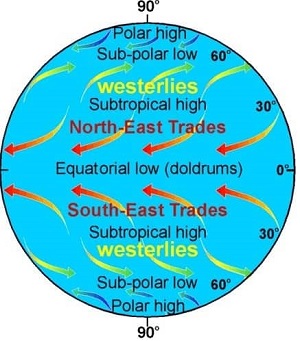 The "Westerlies" are the winds in the middle latitudes most often found between 35 and 60 degrees north and south latitudes; an area approximately 1500 NM wide. They tend to blow from the Sub Tropic High Pressure Belt towards the Sub Polar Low Pressure Belt.

Polar Easterlies are the dry, cold prevailing winds that blow around the high-pressure areas of the polar highs at both the North and South Poles. Cold air sinks at the poles creating high pressure zones, forcing an outflow of air towards the equator; that outflow is then deflected into the Polar Easterlies.

Making Use of the Ocean Currents

A comprehensive text on how to take weather into account for the planning and navigation of voyages, local or global, using the latest technologies as well as the time-honored skills of maritime tradition, so that your time on the water remains as safe and efficient as possible. Covers practical applications of GRIB files, ASCAT wind measurements, and other modern resources.