An Introduction to Tides

The following discussion on tides will be somewhat basic in its construct. This is because unless you are a mathematician, or a planetary physicist, or you just really, really love differential calculus; the formulas and complete explanations will leave you more befuddled than you might already be. Either that or have you looking for something a little less complex; like nuclear physics! So, with that said, let’s get started.

Simply put, they are "The Rise and Fall of Sea Levels" when compared to what can be considered a non-moving object. For the mariner, the obvious choice of a non-moving object is Terra Firma. While technically speaking our land masses also rise and fall, the amounts are so small that its classification here as non-moving still makes sense.

A more formal definition (for those interested) would be – "The periodic short term changes in the height of the ocean surface at a particular place."

So what causes this rise and fall of sea levels? Most people have been taught that the tides are the result of the moon’s gravitational pull on the earth and while it is true that our moon has the dominate role, there are other factors at play as well.

Below is a list of terms and their definitions that you should know, in these explanations we will make use of the tide table excerpt shown below:

Tide tables can be used to find the predicted times and amplitude ("the height") of tides at a given locale on a given date.

Remember: These are only predictions. The accuracy of actual times and heights of the tide vary.

In 2013, the average differences found ranged from 4.8 minutes to 89 minutes in predicted times and from 2 inches to 1.3 feet in predicted heights, depending on the tidal station reporting. Quite often extreme weather events, strong winds, and atmospheric pressure play a very large part in contributing to these errors.

With that in mind, the tide tables are still trusted by mariners around the world.

Tide Facts
The highest tides on the planet 55.8 feet (17m) occur in the Bay of Fundy and Ungava Bay in Canada. The lowest tides ranging from 0.0 to 0.8 inches (0.0 to 2.0 centimeters) occur in the Adriatic Sea and Mediterranean Sea just south of Sicily.

The tidal stage is "what the tide is doing at a particular time and place." There are (5) commonly accepted stages listed below:

Flood Tide - When the sea level is rising. High Tide – as the name implies this is the highest point of the tide when the water depth is at its deepest point (see 0921 and 2143 entries at left).

Ebb Tide – When the sea level is falling. The opposite of "Flood Tide" above.

Low Tide - The opposite of high tide above, this is the lowest point of the tide when the water depth is at its shallowest point (see 0315 and 1537 entries).

Slack Tide - The very brief time when there is no discernable vertical movement of the water. This typically occurs at the beginning of every flood tide and ebb tide cycle.

The vertical distance the water rises, or falls above a stated reference plane due to the tide. This reference plane (Chart Datum) for NOAA U.S. coastal chart products is generally “Mean Lower Low Water” (MLLW) for tidal waters. You can check the reference plane if in doubt; it is printed on all NOAA Charts in the chart title area.

A predicted tide height of 17.7 feet means the water will be 17.7 feet deeper than the depth indicated on the chart. However, since the reference datum is an average, some tides will be higher (or lower) than the datum. This means that the actual depth may be somewhat more, or somewhat less, than the charted depth (± the Tide Height) may indicate.

Tide Facts
Saltstraumen Strait, a small passage located in Norway has what is reputed to be the strongest tidal currents in the world. The maximum flood current occurs about one hour and 15 minutes before high water at Bodø, Norway. Current speeds in excess of 10 knots are common and speeds of 22 knots have been reported in unusual circumstances. Approximately 400 million cubic meters of seawater pass through this 150-meter wide strait on every tide.

When the actual tidal ranges at any particular location are compiled over a long period of time, a "mean tidal range" can be computed for that location.

The Tidal Day or Lunar Day is the time that it takes for the moon to pass over the same longitudinal meridian on the surface of the earth. While the terms Tidal Day and Lunar Day are often used to describe this event, the term Lunar Day is a matter of the observer’s perspective. Are you standing on the moon or the earth? There is a difference. For the purposes of this discussion we will presume that we are earthbound, at least for the foreseeable future and use the term Lunar Day.

If the moon was stationary and the earth was just rotating beneath it the Tidal or Lunar Day would be equal to what we think of as a standard earth day (24 hours).

Needless to say there are a lot of complex rotational and orbital mechanics involved. Had enough? I have!

There are (3) basic types of tides, they are "Diurnal," "Semidiurnal," and "Mixed." A fourth type exists, "Meteorological Tide," that is rarely considered except during extreme weather events. The vast majority of tidal types found around our planet are either Semidiurnal or Mixed. Diurnal Tides exhibit (1) High Tide and (1) Low Tide per tidal or lunar day (≈24 hours 50 minutes) as shown on the left. They are found along the west coast of Alaska, the east coast of Russia, Southeast Asia, and southwestern Australia and portions of the Gulf of Mexico. Semidiurnal Tides exhibit (2) High Tides and (2) Low Tides per lunar day as shown on the right. The heights of both highs and both lows being nearly of the same height.

Many shorelines around the globe experience semi-diurnal tides – the east coast of the U.S. and Canada, the west coasts of Scandinavia and Europe, and most of Africa.

Tide Facts
110 Billion tons (100 billion metric tons) of water moves into and out of the Bay of Fundy with every tide change. 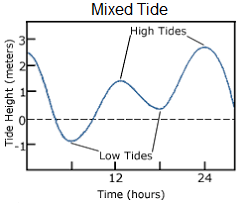 Mixed Tides (often referred to as Mixed Semidiurnal Tides) are tides that deliver (2) highs and (2) lows in a lunar day, but the two highs and/or the two lows may be at significantly different heights (as shown on the left).

They are found along the west coasts of Canada, the U.S. and Mexico, throughout the Caribbean, many parts of Southeast Asia, the Indian Ocean, and portions of the Gulf of Mexico, Australia, and South America.

Meteorological Tides represent all atmospherically influenced tides, such as those affected by wind, barometric pressures, rainfall, ice melting and land drying. One example that most U.S. east coast boaters are familiar with is meteorological storm surge. This occurs when wind and inverted barometric pressure (think Hurricanes and Tropical Storms) combine to cause a dramatic increase in sea levels along the coast lines.

While a number of tidal variations are known, we will only cover (3) of the most widely recognized: Spring Tides, Neap Tides, and Bore Tides.

To start, Spring Tides have nothing to do with either the time of, or the season of, the year. It simply refers to a time of greater than average tidal forces. These increased tidal forces result in tides with higher highs and lower lows than normal resulting in a larger tidal range during this period. As can be seen from the diagram above, Spring Tides occur only when the Sun, Moon, and Earth are in alignment, during the times of the New Moon or Full Moon occurring on average about every (2) weeks.

While both of these equate to Spring Tides, simple observation tells us that the New Moon Spring Tide will have marginally more tidal effect than Spring Tide at the Full Moon.

Considering that it takes a little time for the ocean’s mass to move, Spring Tides actually occur a couple of days after the sun, moon, and earth alignment.

"Perigean Spring Tides" (the point when the moon is closest to the earth) and when a New or Full Moon occurs at the same time. The effect of gravitational forces amplify at this point and adds to the already increased tidal range of the normal Spring Tide.

When the moon is at a right angles (90 degrees) to the "sun – earth line," the tides are weak. These are known as Neap Tides.

During this time, tidal forces are below average due to counteracting gravitational forces between the sun and the moon. These lessened tidal forces result in tides with lower highs and higher lows than normal resulting in a smaller tidal range during these periods. Like Spring Tides, they also occur about every (2) weeks when the moon is in either the 1st quarter or the 3rd quarter as shown above.

Often referred to as a "Tidal Bore" or more often than not simply a "Bore." This tidal variant in which the leading edge of the incoming tide forms a wave (or waves) of water that travel up a river or narrow bay against the direction of the river or bay's normal current flow.

Bores are relatively rare and are only found in a few locations worldwide. Usually in areas that have a large tidal range (20+ feet) and the incoming tide is funneled into a shallower, narrowing river or bay from a larger body of water.

The funnel-like shape not only increases the tidal range, but it can also decrease the duration of the flood tide, down to a point where the flood appears as a sudden increase in the water level. A bore takes place only during the flood tide. The (2) primary features of Tidal Bores are the large amounts of turbulence at the leading edge of the bore and the very loud rumbling noise associated with it.

The most famous of tidal bores is on the Qiantang River in China. The tide rushing into the river mouth from the bay causes a bore which can reach up to 30 feet in height, and travel at up to 22 knots. Needless to say, a bore of this size can be extremely dangerous to both people along the banks as well as marine interests.

Other large Tidal Bores can be found in Canada, the United Kingdom, and the United States; with Bore heights of up to (7) feet.

Tidal Currents are the horizontal movement of the water as it falls from high tide to low tide, or rises from low tide to high tide. Maximum tidal currents typically occur about halfway through both rising and falling tides.

This horizontal water movement quite often lessens to zero or near zero as the tide approaches or reaches either full high or full low. This lack of horizontal water movement is also known as "Slack Water." It is worth noting that slack water does not always occur at the top or bottom of the tides. Slack Water can sometimes precede or follow high and low waters by significant amounts of time especially in what is referred to as constricted waters.

While ocean Tidal Currents are generally weak, those near estuary entrances, narrow straits and inlets, often create current speeds that can be problematic or beneficial depending on your direction of travel. There are some, that can be rated as dangerous reaching speeds greater than 6 knots through narrow straits or canals.

As can be seen there is a lot that goes into the question of "When is the next high tide?" We hope that we were able to provide you with a little more detail into the mechanics of that question without giving you a migraine. With that said, we will wrap this up before you begin thinking about how great the cartoon network on TV really is!

The Science of the Tides

The Science of Tides
@ Amazon